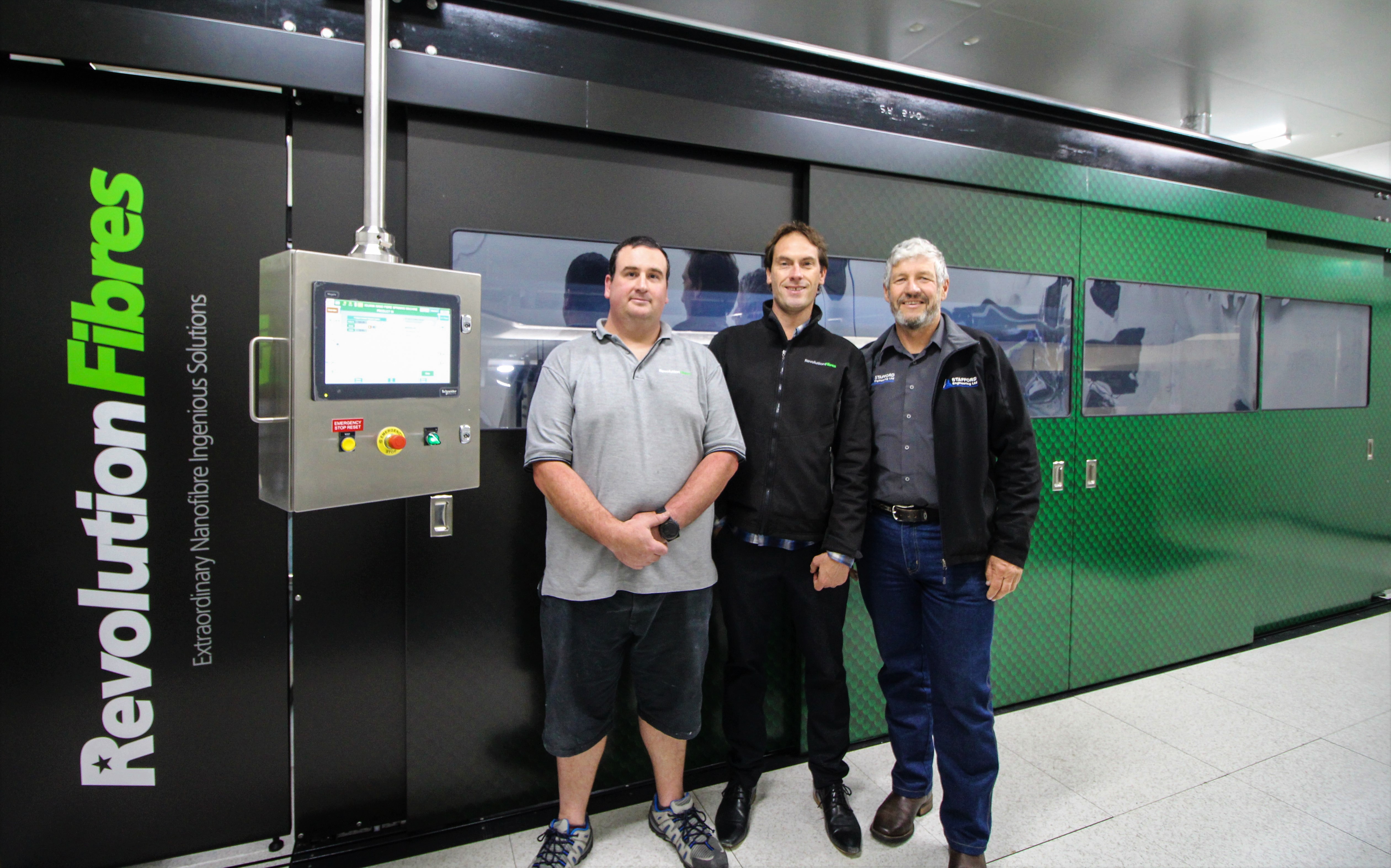 A Waikato company has designed a new machine to mass produce a natural skin care range made from fish skins to meet growing international demand for the product.

With more than 9000 components, and at 7m long, it is one of the largest machines of its kind in the world.

Revolution Fibres Operations Manager Brent Tucker says while the company has been producing nanofibre for almost a decade, the Iguana enables a greatly increased production capacity to meet demand for ActivLayr both locally and internationally.

“The Iguana is a fantastic collaboration between the best Kiwi minds from the science and engineering worlds. It allows Revolution Fibres to increase production to meet demand, but it also means we can grow the production of ActivLayr in New Zealand.”

Roger Evans, Stafford co-founder, says most of its clients know what they want to produce but don’t have the expertise or capability to build it themselves.

“That’s where we come in. For us a machine is a machine and in the case of Revolution Fibres, they had a very good idea of what they wanted.

“The design of the Iguana is a collaboration of Revolution Fibres’ knowledge and requirements, and our engineering expertise to ensure the equipment performs and functions the way it should and produces the best possible outcome.”

The nanofibre manufacturing process starts with fishing company Sanford supplying hoki skins, from which pure collagen is extracted. Using the process of electrospinning in the Iguana, Revolution Fibres transforms the collagen into nanofibre. During the electrospinning process natural ingredients such as kiwifruit and grapes, and hyaluronic acid (an ingredient to help the skin retain moisture), are infused to create rolls of anti-aging ActivLayr.

Nanofibres – measuring between 100-500 nanometres in width (a human hair is 50,000 nm wide) – can create vast changes in mechanical strength, reactivity, and, in the case of skin care, absorbancy.

After more than 30 years in the Waikato, Stafford has worked extensively in the dairy industry as well as attracting local and international clients from the food processing and packaging industry that need customised machines to meet their individual needs.

“We’ve found a niche in supplying bespoke machines like The Iguana – so making one-off, complex machines makes us unique both locally and internationally.”

Evans says when Stafford started working with Revolution Fibres three years ago they knew nothing about electrospinning technology.

“We built a far smaller ‘pilot’ machine two years ago for Revolution Fibres which was then used by a research facility in the US, and that gave us sufficient knowledge, together with design input and insights from Revo to take on The Iguana.”

“It’s great to have companies like Stafford in New Zealand,” says Revolution Fibres CEO, Iain Hosie. “Our trust in Stafford means we can continue to grow our manufacturing operations in NZ with confidence. We have huge input into the design and know the output will be professional and built-to-last.”

The Iguana will enable Revolution Fibres to quadruple its existing production output, with capacity to increase scale in the future. The company currently has large orders for ActiVLayr in Asia, and an increased demand for nanofibre products from a diverse range of sectors, including Formula One racing teams and the aerospace industry.

“There is a growing number of industries embracing what nanofibre can do for performance and gaining a competitive edge,” says Hosie, “and that will only increase as research uncovers even greater opportunities in life sciences. The scope for what you can do with nanofibre feels limitless.”