A California-based autonomous aircraft company has unveiled the world's first self-piloted electric air taxi, having trialed it in secret in Canterbury since October 2017.

It takes off like a helicopter, flies like a plane, and since October 2017 has been Canterbury's best kept secret.

This week, Zephyr Airworks unveiled the world's first self-piloted electric air taxi, having tested it in secret in the Canterbury region over the past five months. Its creators hope a network of flying taxis could be a real possibility in New Zealand within the next three to six years, giving everyone a fast and easy way to get around that doesn't come at the expense of the planet. 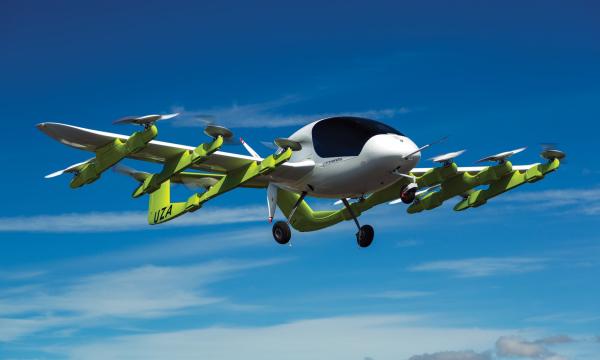 The aircraft prototype, named Cora, is being developed by California-based Kitty Hawk Corporation, and is reportedly personally funded by Google co-founder Larry Page. Its New Zealand operator is Zephyr Airworks.

Hosting a trial like this is a huge get, not only for the Canterbury region, which is cementing itself as a place with a brave appetite to try things that haven’t been done before, but for New Zealand as a whole. The New York Times calls New Zealand's decision to embrace the commercial use of flying taxis "an opportunity to leapfrog many developed countries in this area," affording the country a "head start over Silicon Valley, where much of the most innovative work has been taking place."

Of course, Silicon Valley is central to the Cora project: it's backed by some of the smartest minds in aviation and transport technology, including former staff from the likes of Google, NASA, Boeing and Honeywell. Kitty Hawk's chief executive is none other than Sebastian Thurn, founder of Google's R&D facility X, where he led Google's self-driving car project. Zephyr Airworks boss is Fred Reid, the founding CEO of Virgin America, and former president of Delta Air Lines and president of Lufthansa Airlines.

Reid told Stuff New Zealand came top in a global search for test sites for many reasons, including the relative ease with which native certification could be achieved, our intellectual property protection laws, and our openness to new ideas.

ChristchurchNZ Chief Executive Joanna Norris concurs: "We have been working closely with Zephyr Airworks and this partnership is a significant demonstration of our joint commitment to finding ways to improve future ways of living. Zephyr Airworks came here because of the ease of doing business in New Zealand, our safety-focused regulatory environment, our culture of ingenuity and our vision for clean technologies and future transport alternatives.

"Trials such as this allow us to consider future possibilities for transport which could have far reaching benefits to everyday travel and could even support our growing tourism market, enabling people to enjoy our beautiful place safely. This project also supports Christchurch's strengths as a place to trial and commercialise innovative ideas and to explore new ways of living,” she says.

Christchurch is exploring other methods of future transportation that's good for the world, with projects in the city such as the Omhio autonomous vehicle trial and the Yoogo electric car sharing scheme.

Read more about what the Cora project means for New Zealand here.